SmartDraw originally dates back to 1994 as a tool primarily for the use of process mapping, organisational charts, maps, and various forms of technical diagrams. The software still exists to this day, although the choice of diagrams has changed greatly and a web-based version is now available.

Today we rewind back to Halloween of 1997 when Version 3.2 was released, an incremental update from the original 3.0 release in 1996. The next major release was a couple of years away, so I’m led to believe this would be the last to support Windows 3.1. A native Windows 95/NT build was also available during the installation process. At the time it had been a much more affordable option compared to its competitors, Visio Corp.’s Visio Professional 4.5 and Micrografx FlowCharter 7.0. The point of difference apart from the retail price tag was to simplify the creation of diagrams to suit the occasional user.

On hardware, a Pentium 90 with 8 MB RAM is enough to get by.

Upon startup you’re presented with a welcome dialog box. Much of it is consumed to offering users hints and tips. Showing hints as you use SmartDraw is aimed at new users, prompting you with dialog boxes with information on utilising a feature that had been selected for the first time. 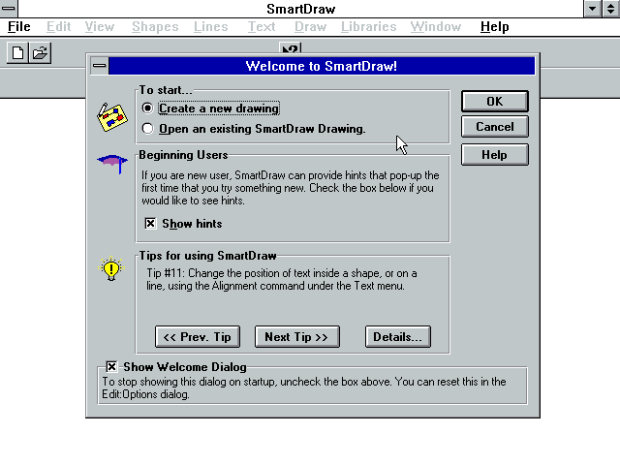 You’re presented with a welcome dialog box upon startup, offering hints and tips for new and experienced users.

From here, you may start with a blank canvas, or choose from one of the available templates. Templates are broken into the categories of diagrams, flyers, frames, and maps with the bulk naturally under diagrams. The diagrams are where you’ll likely look the most searching through the assortment of organisation charts, pyramid charts, and room plans amongst others listed. 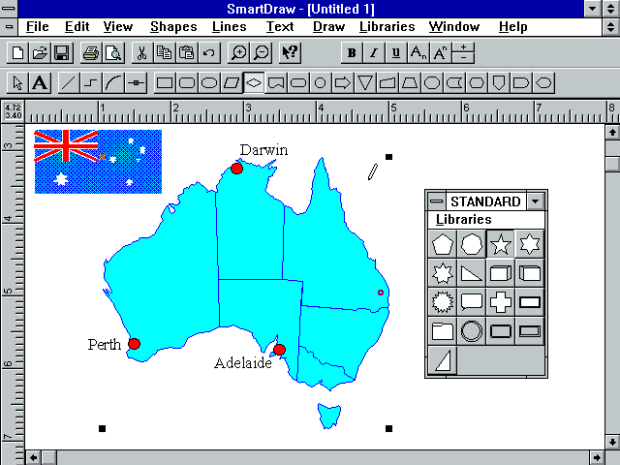 Libraries bring up a large selection of categorised objects known as SmartDrawings depending on the intended purpose of your diagram. There’s also the ability to create your own libraries, or extend existing ones with customised objects that you’ve made. As shown below there’s some controls on their characteristics, such as whether to be able to include text, or change the colour. Toolbars can be made from these libraries for easy access.

As objects are placed, connectors will easy snap into position between them and move accordingly as you adjust the positioning in the process of designing your diagram. 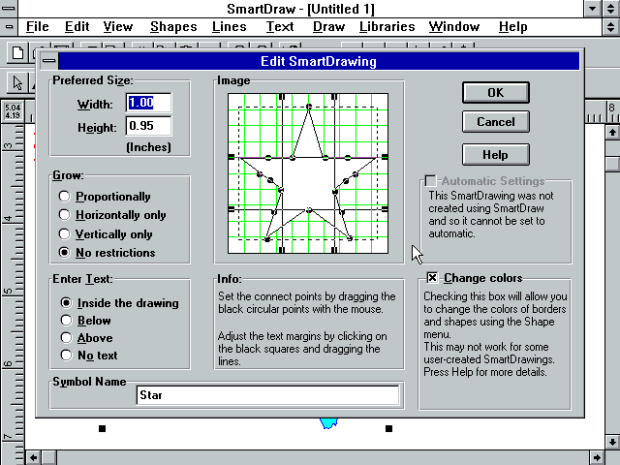 Create or modify SmartDrawings (i.e. objects) to suit your needs, and save into new or existing libraries.

Version 3.0 brought about other new features such as the ability to export to GIF and JPEG image formats, print preview function, curved lines, and opening up to 32 drawings at once.

A tutorial is included comprising of several chapters that will get you up and running using the bulk of the application. This is more or less viewed as a PDF style document. The document is embedded within an executable file with a read only copy of Novell Envoy Runtime Viewer – a failed attempt to compete with Adobe Acrobat in the 1990s.

To me, SmartDraw has a vague similarity to that of Microsoft Publisher in terms of the target market. The price point was attractive for home and small business users that have a need to fulfil but not necessarily on a daily basis. Professionals earning a living designing floor plans or electrical diagrams would likely looked elsewhere.